In March 2013, I came here with a business plan, financial documents, and not much else in hopes that I would be able to invoke the Dutch American Friendship Treaty and start a sole-proprietorship in the Netherlands. My visa was granted a couple of weeks ago (until May 2015!) – and while I am still waiting on paperwork to finalize it, I wanted to describe the process for anyone else looking to do the same, or anyone else who knows me and is wondering what the heck I’m up to lately.

I’m glad: I hired a lawyer. I’m sure that there are other people who have successfully navigated this process on their own but I think it would have been very hard for me to do this on my own. That said, if anything I say here helps you do this on your own, right on. Also, I’m glad that I went through this process with someone who was a native Dutch speaker – my understanding of Dutch is LIMITED, so it was incredibly helpful to be able to rely on Manon for help.

I found that this was a very linear process, and each step had a certain amount of logic to it. Here’s the process I went through, step by step:

Two-dimensional trees by the IND in Zwolle 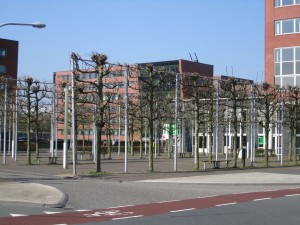 The first step is to go to the IND (the closest office was Zwolle) – this is the appointment that I had discussed earlier this year. That was relatively simple – I provided paperwork to them, gave them a 600-euro processing fee, fingerprints and a photo and received a provisional six-month visa stamp in my passport. From that moment on, the clock started ticking – I had up until November 6th to receive notification from IND that they approved my proposal and granted me a visa.

Near the city center in Zwolle 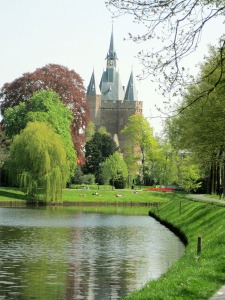 Next I needed to go to the local Gemeente (city hall) in Leeuwarden, where we were living at the time, to apply for a Burgerservicenummer or BSN. A BSN is the equivalent to a social security number. The Gemeente is more than a city hall – it’s the nucleus of a town. If a person needs government benefits, or to get married, or has moved, they must go to their local Gemeente. Leeuwarden’s looks like a nice library built in the early 90’s – high ceilings, brightly colored furniture, somewhat spacious. The process is to go to the front desk, tell them why you’re there, get assigned a number and wait to talk to a caseworker. That day it took a long time for my number to be called, and the caseworker I met with seemed nice but somewhat befuddled by my request. When I told him that my lawyer said that they would maybe be able to assign a BSN right there, he sheepishly acknowledged that it would probably take a couple of weeks instead. I waited a couple of weeks, didn’t hear anything, and began insisting to Manon that we go back. We found that they didn’t have me in the system yet, so the caseworker called over her colleague, a woman that lived in Washington D.C. for eighteen years, to help. She asked me to describe the person who had helped me before, and was able to track him down, find my paperwork on his desk, enter it for me right there, and give me my BSN number.

From there, I went to the Kamer van Koophandel or Chamber of Commerce. I thought that it was a great idea to register my business with them, because a chamber of commerce could offer me advice, help me network etc. Our visit dealt primarily with getting registered and getting a tax id. The KvK works closely with the Belastingdienst, or the Dutch equivalent of the IRS.  (Fun fact: the Belastingdienst had a boat in the Amsterdam Pride Parade this year – try to imagine the IRS in any parade.) Most people I had encountered up until this point had basic or better English skills, but at the KvK, the woman we met with looked very anxious when I did my spiel in Dutch that I would like to speak English, so Manon described my business to her and translated for me. I found this somewhat unnerving – was Manon giving her the right information? I was also frustrated that the conversation kept going back to taxes – they were the Chamber of Commerce, so I kept trying to reassure her that I’d worry about that later. But, everything worked out well – I received my provisional tax id, and was told that I would receive the official one in the mail in a couple of weeks (I did). 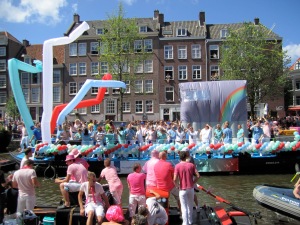 Now that I had a tax id and BSN number, I could open a business bank account. This bank account must have a “substantial investment” of 4,600 euros at all times for me to be in compliance with the treaty. I couldn’t just walk into a bank and open an account for some reason – I had to schedule an appointment and wait two weeks. But since I had all the paperwork I needed, this step was about as simple as opening an account in the US.

These steps took me a total of two months, which only left four months for the IND to receive my proposal and consider it. By the beginning of October, my lawyer mentioned that my case had not been assigned yet and that he would work to expedite it. I was going to the US in the middle of October, and by the time I left, I still hadn’t heard anything. Before I left for the US, I felt like I was a week away from a nervous eye twitch. The fretting was for nothing, since I found out when I was over there that the visa had been granted.

All and all, this has been a rewarding experience. It is also by far the hardest thing I’ve ever done. Immigration, even for a provisionary period, is not simple, and I’m proud that I’ve been able do it. I still have a lot of work to do to get my business up and running here – which is frightening, but also exciting.

I am a US expat from the Chicagoland area living in the Netherlands. View more posts

One thought on “DAFT Update”